Cataracts are opacities (clouding) in the lens which block light and can subsequently decrease an animal’s functional vision, depending on their severity.

There are several different causes for the development of cataracts including genetics, trauma, inflammation, older age, or secondary to Diabetes Mellitus (in dogs). We refer to four different stages of cataracts in order to estimate vision, or lack thereof. While some cataracts can remain small and insignificant for a patient’s entire life, others can progress rapidly and result in total blindness.  Surgery is the only treatment option available to eliminate these vision debilitating opacities. This procedure is one of the most common, sophisticated, and delicate procedures we perform, thus it does require general anesthesia and extensive postoperative care for the first month. However, it is also one of the most rewarding surgeries. Returning sight to the blind dramatically improves the quality of life for our patients.

Before and After Case Photos 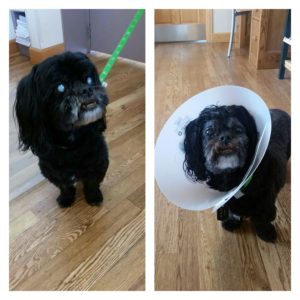 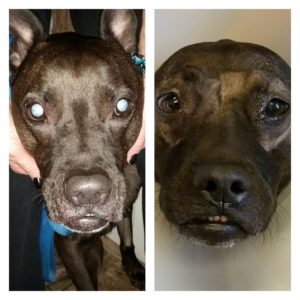 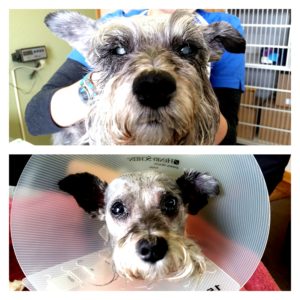 Cataracts are opacities in the lens of the eye. Many people mistakenly think the cloudiness is on the surface (thought to be a “film” on the cornea), but in fact the cloudy lens is deeper inside of the eye.

Many cataracts are inherited, and are found in breeds such as the Cocker Spaniel, Poodle, Husky, Schnauzer, and Golden and Labrador Retrievers. Other causes of cataracts include Diabetes Mellitus, trauma, inflammation, and geriatric change. Many cataracts will worsen to the point of blindness. However, certain types, e.g., some of those affecting Golden Retrievers, can remain small for the entire life of the patient.

Treatment for cataracts requires surgical removal and may be done in one or both eyes depending on the specifics of each patient. Before surgery is performed, your pet will need to have special tests performed beyond the full ocular exam to check the health, or lack thereof, of the retina in the back of the eye. These tests may need to be performed with the patient sedated so that the animal does not move its head or eyes (excessive movement may adversely affect the test results). The first test, called an electroretinogram (ERG), determines if the retina responds adequately to light. It is not painful and has negligible risk associated with it. The second test, an ocular ultrasonogram, is also usually performed. The ocular ultrasonogram illustrates if the retina is in its normal anatomic position or if it has detached from the back of the eye. If your pet does not pass these tests, removal of the cataracts would most likely not improve the vision, and therefore, surgery is typically not performed.

Cataract surgery is an elective procedure and requires a significant time commitment on the owner’s part. Eye drops must be administered before surgery and for about 8-10 weeks after surgery (on average). Your pet must wear a protective plastic Elizabethan collar for at least 3 weeks after surgery, he/she will not be able to be groomed or vaccinated during the postoperative healing period, and the patient must remain quiet with no barking or excessive activity. Assuming no unforeseen complications develop, the postoperative evaluations are performed at 24-48 hours after surgery, one week, three weeks, and three months. Medications will be weaned down and the long-term checkups are made approximately every six to eight months thereafter. Please realize that every patient is different and rechecks may be suggested more or less often depending on the individual animal.

If the patient is considered a good candidate for cataract surgery (i.e., young with no major medical problems such as diabetes mellitus, no serious adverse ocular manifestations caused by the presence of the cataracts, cataract(s) that have only recently developed, and either a mixed breed or a purebred which is not known to have an increased prevalence of postoperative problems) the success rate is approximately 85-90% for a visual and comfortable eye, but as with any surgery, there are risks. The most common postoperative vision eliminating complications include glaucoma and retinal detachment. Posterior capsular opacification (PCO) is an extremely prevalent long-term complication following canine cataract removal surgery and artificial lens implantation with a published incidence of 69-100%. Fortunately, however, PCO only rarely causes a marked decline in postoperative vision. The incidence of postoperative ocular hypertension (POH), postoperative glaucoma and blindness have recently been reported to be significantly higher in Labrador Retrievers (probabilities of postoperative blindness in Labradors were 5%, 9%, 15% and 27% at weeks 4, 26, 52 and 104, respectively) versus non-Labradors (ref. 2). In another very recent retrospective study (ref. 1), 148/179 (82.7%) postoperative cataract surgery patient eyes were functionally visual at the end of the study period. Blindness occurred in 18/179 (10.0%) eyes and reduced vision in 13/179 (7.3%) eyes. The most common postoperative complications in this study were: postoperative ocular hypertension 22.9%; corneal lipid opacity 19.0%, uveitis 16.2%, intraocular hemorrhage 12.3% (intraocular hemorrhage, a common cause of an undesirable outcome, was 494.5 times more likely in Boston terriers and 174.4 times more likely in Poodles), retinal detachment 8.4% (more common in Boston terriers, poodles, the Bichon Frise, and Shih Tzu) and glaucoma 6.7%. The odds of blindness were significantly greater in the eyes of Boston terriers; i.e., blindness was 290.44 times more likely in the eyes of Boston terriers compared with the eyes of mixed breed dogs.

Cataract surgery is performed under general anesthesia and we are proud of our anesthetic protocols and monitoring systems. The gas anesthetic used (sevoflurane) is a state-of-the-art agent. All patients are monitored with pulse oximetry (continuously measures oxygen levels within the blood and pulse rate) electrocardiography (ECG) and blood pressure devices. We make every effort to avoid complications, but as with any surgery in any species, risks do exist.

Phacoemulsification is the same technique performed for human cataract removal. The tiny probe breaks up the cataract with ultrasonic vibration and aspirates (draws out) the emulsified cataract particles. Many people believe that cataract removal is done with a laser but that is incorrect! After removal of the cataract(s) we usually replace the lens with an artificial lens implant (IOL). This implant improves the near vision for the patient. It is important to remember that not all patients are acceptable candidates for artificial lens implants but in those aphakic (no lens) patients, good functional vision can still be achieved postoperatively.

What is the cost to remove the cataracts?

Each patient is treated as an individual but the typical costs are outlined below:

Payment is due at the time services are performed, specifically at the initial exam, ERG/ Ocular ultrasonogram and on the day of surgery. Although we do not have any “in house” payment plans, we do accept Visa, MasterCard, American Express and Care Credit to help with any financial burden. Please feel free to ask our support staff or Dr. Dugan if you have any further questions.

As mentioned above, cataracts are opacities in the lens of the eye. Many cataracts are inherited in breeds such as the Cocker Spaniel, Poodle, Husky, Schnauzer, and Golden and Labrador Retrievers. Other causes of cataracts include: Diabetes Mellitus, trauma, inflammation, and geriatric or aging changes of the lens. Many cataracts progress to the point of blindness. In contrast, some cataracts remain small for the entire life of the patient, and as such, never cause a noticeable loss of vision. Elective cataract surgery may be performed in some patients to restore vision when the cataracts have been documented to be progressive or have already caused an obvious decline in functional vision. A common phenomenon occurs in many rapidly developing cataracts wherein the patient develops a local “allergic” type reaction to the cataract known as lens-induced uveitis. Severe lens-induced uveitis can result in complications such as scar formation and glaucoma and can prevent cataract removal from being performed.

Diabetic dogs constitute a large proportion of our cataract surgery patients. Diabetes Mellitus causes hyperglycemia (high blood sugar levels) which overwhelms the normal enzymatic pathways of the canine lens. The extra sugar is converted into sorbitol that, once formed, cannot escape the lens. The sorbitol causes an influx of water into the lens, distorting the normal lens fiber patterns thus changing the lens from a transparent (clear) structure into a translucent (cloudy) structure. This process often occurs rapidly (over several days to weeks) and can cause lens-induced uveitis as described above. In contrast, cats and humans do not form cataracts as a consequence of hyperglycemia.

There are many ways to classify cataracts, but defining them by their stage of development is most relative to vision, or lack thereof. Determining how much we can see into the back of the patient’s eye can give us an estimation of what your pet sees. Although cataracts can obscure vision, light perception is maintained as long as the retina and optic nerve are functioning. Please realize that all animals are unique, but at your consultation we will give you the likelihood that your pet’s cataract(s) will progress. A brief description of the different kinds of cataracts based upon their stage of development is given below.

What is an electroretinogram?

An electroretinogram (ERG) is a diagnostic test performed to determine whether or not the retinas are healthy. The ERG measures the electrical response of the retina after a light is flashed in front of the eye. The response, or lack thereof, is recorded on a computer screen. A healthy ERG recording looks similar to the tracings of a heart monitor, or electrocardiogram (ECG). A healthy retina produces a wave of a known amplitude. The patient’s ERG tracing is compared to what is known to be normal to determine whether the retina is functioning properly. In humans, ERG’s are performed in an awake patient with no sedation because the test does not hurt. However, because some animals will not hold still for the procedure, we may need to sedate your pet in order to obtain an accurate result.

The ERG is an important diagnostic tool. Examples of some of its uses are listed below:

1. The ERG is used as a preoperative diagnostic test in preparation for cataract surgery. It is imperative for us to confirm healthy retinas prior to pursuing cataract removal surgery.

2. The ERG can help diagnose Sudden Acquired Retinal Degeneration (SARD). This problem may be suspected when the retinas appear to be healthy when viewed with an ophthalmoscope, but the patient is acutely blind. With SARD, the ERG tracing appears as a flat line; i.e., no recordable wave form.

3. The ERG can detect early Progressive Retinal Atrophy (PRA) before the disease is apparent in a visual exam of the retina or before clients notice nyctalopia, or night blindness. In early PRA, the amplitudes are less than those of a normal dog. As the disease progresses over months or years, the ERG amplitudes are expected to decrease and eventually become flat.

4. The ERG can help diagnose Optic Neuritis, which is inflammation (irritation) of the optic nerve. As in the case of SARD, this problem may also be suspected when the retinas appear healthy when viewed with an ophthalmoscope, but the patient is blind. In the case of Optic Neuritis, however, the ERG tracings and amplitudes are normal. When the ERG is normal and the patient is blind, this suggests there is a problem somewhere between the retina and the brain (optic nerve, optic chiasm and/or optic tract). A problem with the optic nerve can prevent the signal perceived by the retina from traveling to the brain.

What is an ocular ultrasonogram?

An ocular ultrasonogram is a noninvasive diagnostic test that can usually be performed using a topical anesthetic and gentle restraint. This diagnostic tool is used prior to cataract removal surgery in order to visualize the location of the retina which is sandwiched between the vitreous (thick, transparent gel that fills the cavity between the lens and the retina) and the sclera (outer, tough structural support of the eye). If the ocular ultrasonogram identifies a retinal detachment, it is unlikely cataract removal surgery will be recommended due to the preexisting, vision eliminating complication.